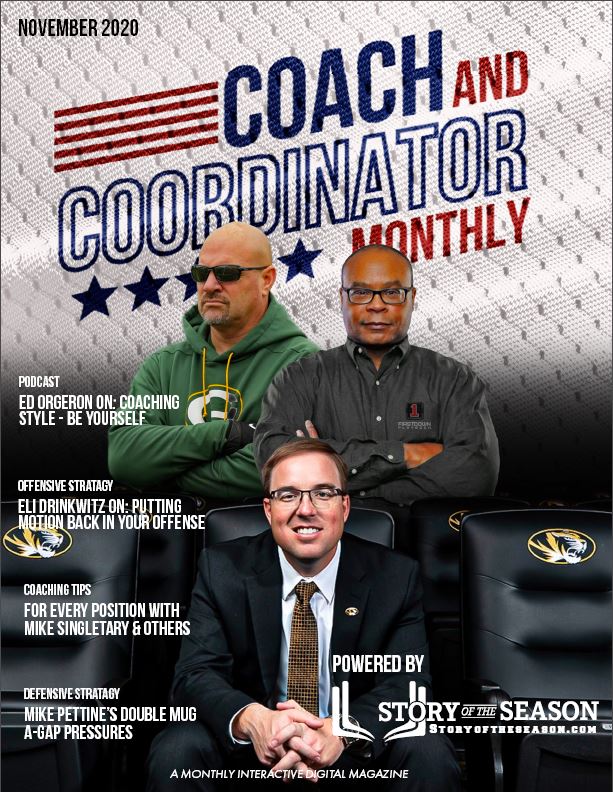 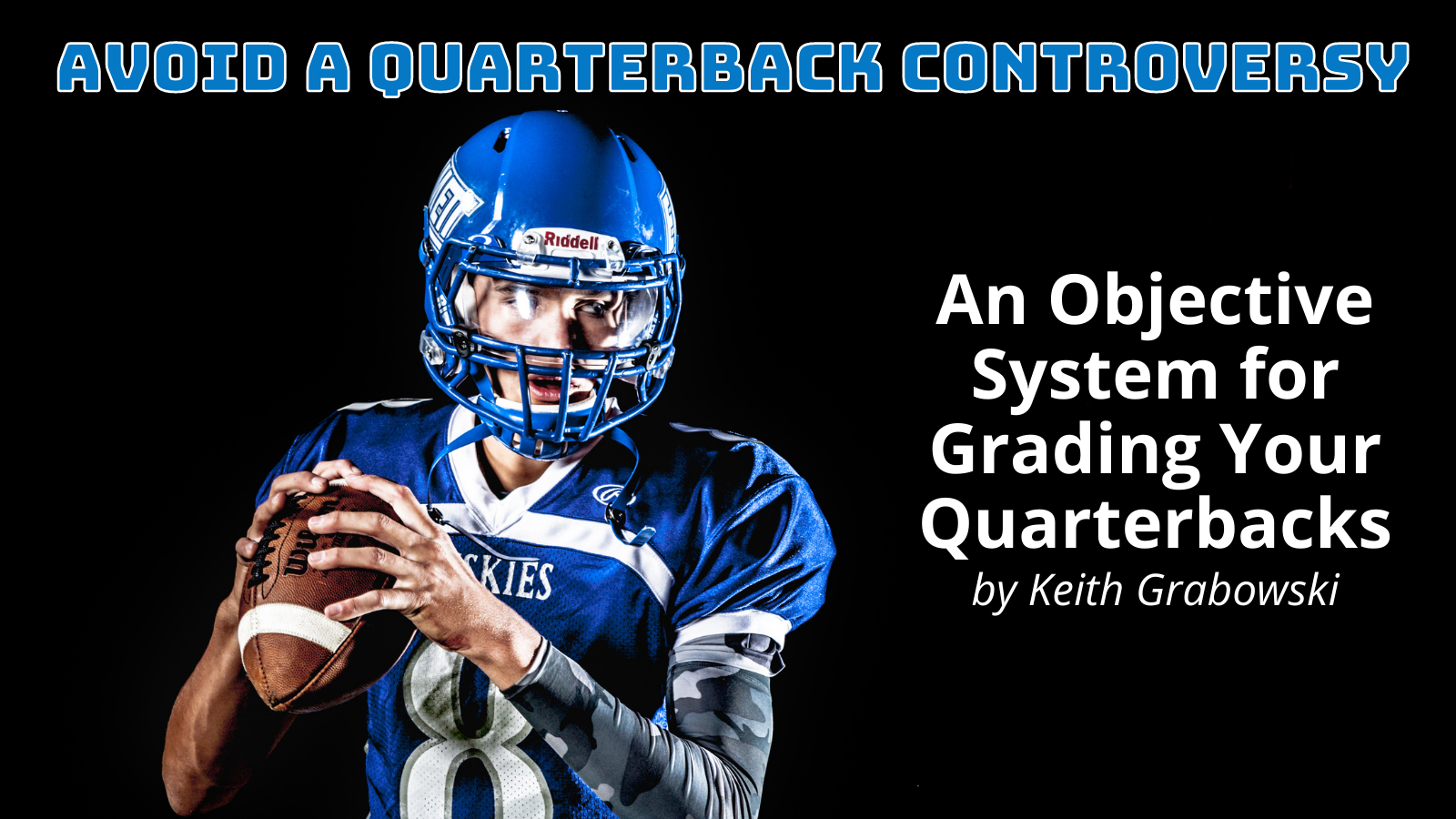 In the spring and fall of 2010, we had a heated battle for the starting quarterback position.  Our three-year starter was graduating and we had three freshmen battling to be in the number one spot at the beginning of their sophomore year.

That year I used three criteria to help me objectively distinguish the starter from the back-ups.  After doing that, I realized I could develop the criteria further to not only slot each quarterback in a position, but also give the position group valuable information about where they needed to improve.  This is a system that continues on into camp and through the season, and helps give both the quarterbacks and me feedback on what needs work.

The first three criteria I used were release, accuracy, and decision. Each gave important information about how the quarterback was performing in some critical aspects as a passer. The total of the three was averaged to give an overall grade. I posted all of the quarterbacks’ scores for each of them to see not only how well each one was performing, but also how each compared to the other quarterbacks. In addition, before grades were posted, each quarterback had to evaluate himself based on the same criteria. I could see very easily if the QB wasn’t being objective, and for the most part, they were actually more critical of themselves in this process. I like that they were looking at the little things in which they could get better.

Release refers to how quickly the quarterback is getting the ball out.  It is a product of footwork and vision and includes the use of his pre-snap and post-snap thought processes. Proper mechanics also affect his release time.  These are calibrated to the type of throw he is making. Quick game should be out in 1.5 seconds or less. For drop back, we expect his first route in the progression to be thrown on the last step of his drop on rhythm between 1.8 and 2.0 seconds from the snap to the release. The intermediate routes which are second in his progression are thrown from 2.2 to 2.6 seconds depending on the depth and type of break.

For the quarterback, these are calibrated with one or two hitch steps with each accounting for .2 seconds. Check downs or hot routes should be thrown by 2.6 seconds or sooner, and at worst I should see the quarterback escaping the pocket or moving to keep it alive at 2.6 seconds if nothing is there. Initially, in route timing drills and pass skelly, I will stand behind the quarterback with a stopwatch and give him his release time.  What we have found is that we become huma stopwatches. As they get a feel for timing and rhythm they can turn around and tell me their time within a tenth of a second.  We will sit in film and call out the times before looking at the stopwatch and be dead on. Our freshmen marvel at this and think we are some kind of freaks.

The results of this constant evaluation are shown in chart I that show each quarterbacks improvement over the course of the spring (See Chart 1 – Quarterback Release Times in Spring).

We chart completions and completion rate for each quarterback, but put more value on his accuracy grade. Being accurate means he must give the receiver a chance. Just because it’s complete doesn’t mean it’s accurate.  Proper ball placement is important. We tell the quarterback to “talk to the receiver with the ball.” Meaning that ball placement should tell the receiver which way to turn with the ball.  A pass may be complete, but the ball placement may put ball security after the catch at risk.  Furthermore the accuracy grade accounts for both dropped balls which don’t count against the QB negatively and spectacular catches which save a bad throw and do count against the QB negatively in his accuracy grade.

Decision grade indicates the percentage of time the quarterback is making the right decision and using the pre-post-snap processes correctly.  This is where his understanding of the concept, study of film and understanding of defensive coverage structures and defensive reactions show.    We want to see that his eyes and feet are moving through the progression correctly and taking him to the correct throw.

As we learned more about what we really wanted and the timing we needed on our concepts and routes, release was defined further.  Every route had a timing tied to it, and this served as feedback for our quarterbacks, receivers and coaches as to what needed improvement.

Release, accuracy and decision carried the most weight for us and how the quarterback performed as a passer. These three  combined to give us the overall percentage grade for the quarterback. Because we were giving this feedback, I was also able to evaluate what I was doing on the field as a coach to make them better.

However, I wanted to dig deeper and show each quarterback how he was performing in other aspects.  Being able to collect and analyze data in the types of routes a QB is hitting with consistency, information on his decision making process and how well he operates the offense also aid in the evaluation of our quarterbacks in both determining playing time and practice needs.  We created grades called “percent of rhythm complete“, “percent of decisions late”, “chain movers” and “tempo.” (See Chart 2 – Criteria)

His percentage of rhythm complete score tells the percentage of the routes that he is completing on the last step of his drop.  These are explosive passes that calibrate with a throw on the last step.  All passes are counted only if complete and becomes a percentage of his total completions, not a completion rate.  This aspect of his passing ability is a product of footwork and vision including use of our pre-snap thought process.

Another aspect that we chart and give feedback on is the percentage of decisions that are late. This gives him the percentage of the time that he went to the correct receiver but took too long to get the ball out and make the correct decision.  Technically, this will also reflect as a minus in his release time, but it also shows him if he is seeing things correctly  but  triggering too late.  What it tells me as a coach is that we need to continue repping that concept so that he gains confidence in throwing it and the feel for the correct timing.

Chain movers are throws that gain 10 or more yards on the pass itself.  These show the percentage of throws in which he is hitting receivers downfield in space. We derive this number by taking the number of rhythm and intermediate routes he is hitting and dividing it by total completions. Check downs are a reality in the passing game, but quarterbacks who only throw check downs are showing a lack of confidence, timing, or accuracy in getting down the field and that deficiency must be corrected in order to have success.

Finally, tempo tells us how well he is operating the offense. We script the exact same reps and number of reps for the quarterback when we are evaluating and slotting our quarterbacks, and we time how long it takes each one to move his unit through all of those reps. This is an indicator of how well the quarterback is doing running the offense, using procedures and getting players aligned.  We will add time to his total if an error occurs procedurally or with alignment.  This forces him to be the leader he needs to be on the field.   Our younger QBs usually get the later sets of reps in practice. They are constantly reminded to get their “mental reps” and learn from the groups before them. This has been valuable in helping the progress of our younger quarterbacks.

Grading and evaluating our quarterbacks constantly helps develop them into the field generals who can operate our offense effectively.   We also value the intangibles like leadership, confidence, poise and composure.  Our quarterbacks throwing mechanics are also recorded on video and put through slow motion analysis.  We want to develop our quarterbacks in every area that can affect their performance.  Having a very objective set of data like that described in our grading system helps create a clear picture of where each quarterback is in his development.

As coaches, we have all faced  tough situations that those who do not put the time into it may not understand.  The quarterback position seems to be the one that attracts the most attention when it comes to deciding who the starter is. Having clearly defined performance standards and giving players constant evaluation helps make our decisions tangible for those involved.