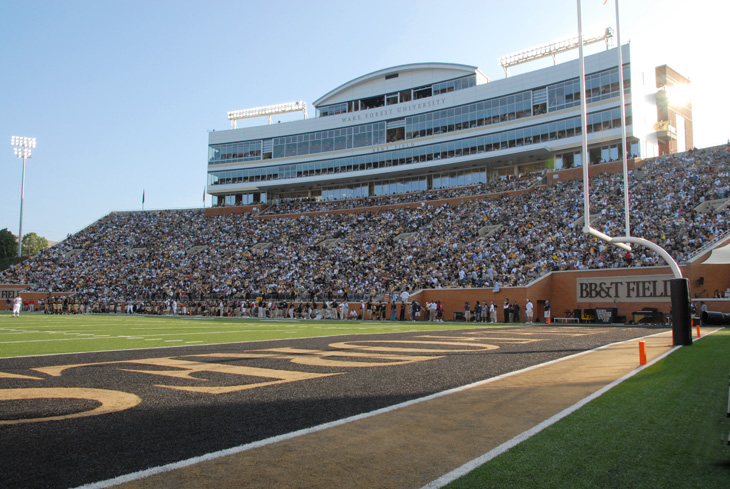 Wake Forest has found consistent offensive success in the last few years. Watching video of that offense operate in 2017 compared to what they were doing in 2019 and now again in 2020, on the surface appears to be the same when looking at diagrams of the play, but the video shows something distinctly different. This is visible in the mechanics of their handoff. While the Deacons would ride their mesh in 2017, the ball handling and timing is much slower and deliberate in 2019.

The first thing that almost anyone will notice is that the quarterback and running back literally walk to the line of scrimmage as they make the decision of who is getting the ball and where it is going. A typical zone read mesh takes about 1.3 seconds from snap to decision. Charting a game full of plays of the Deacons shows an average of 2.06 seconds from snap to decision, with the mesh taking as long as 2.5 seconds on some plays. For reference, 2.5 seconds in the drop-back game allows a quarterback to get through three receivers in his progression, allowing for one or two hitch steps before throwing the ball and making intermediate routes like digs and comebacks a possibility.

The interesting part of this is when the movement of the offensive line is examined. The line is not passive in any regard. When they fit on a defensive linemen, they are working hard to distort him and help create the running lane, but they are not taking lead steps off of the line. They are using brace-pop or scoot footwork (John Strollo technique). They work to cover up the defensive linemen and let gaps be declared.  Level one is distinctly being taken care of and the offensive line will not chase up to level two until level one is secure. They let level two (or three) come to them and get their punch underneath the defender. From there the hips are definitely engaged and they are moving defenders. Watching the video shows the offensive line in strong postures with leverage on the defender. Notice that it’s not about made level as much as it is hip level and those hips being fully engaged in the block.

Because the line is not running off the ball, the quarterback and running back can take their time getting to the line and see the running lane opening before them. This technique is used with all of their inside runs.

Inside Zone (Y Insert to LB):

These plays are tied into the RPO, and the quarterback can pull and throw at any time. Because he is taking longer, it’s common to see a receiver from the outside running a speed dig into a window. The ball is being thrown to the receiver at 10 yards. Because of the line’s technique, having an ineligible downfield is not a concern.

The other interesting aspect of this is what happens if there is an unblocked defender sitting in the running lane. If this is the case, the quarterback will pull and get behind the running back who becomes a lead blocker. This can be seen on several of their short-yardage plays.

In some instances the QB uses the old Jim McNally “butt block” technique. In the video below he can see the safety coming down pre snap and knows he has an extra man off the edge who could be a problem. He still executes the slow mesh while looking over his shoulder and mantains the illusion of an RPO threat. The linebackers stay at level two because of it. As the safety gets near he releases the ball to the running back and butt blocks the safety and shields the ball carrier from being tackled.

Offensive coordinator Warren Ruggerio and offensive line coach Nick Tabacca have done a great job utilizing this strategy on inside zone, power and wrap schemes. The running lanes are clear and distinct, and their run game has proved to be an efficient part of what is currently the No. 4 offense in the country. It will be interesting to watch how this strategy continues to develop.