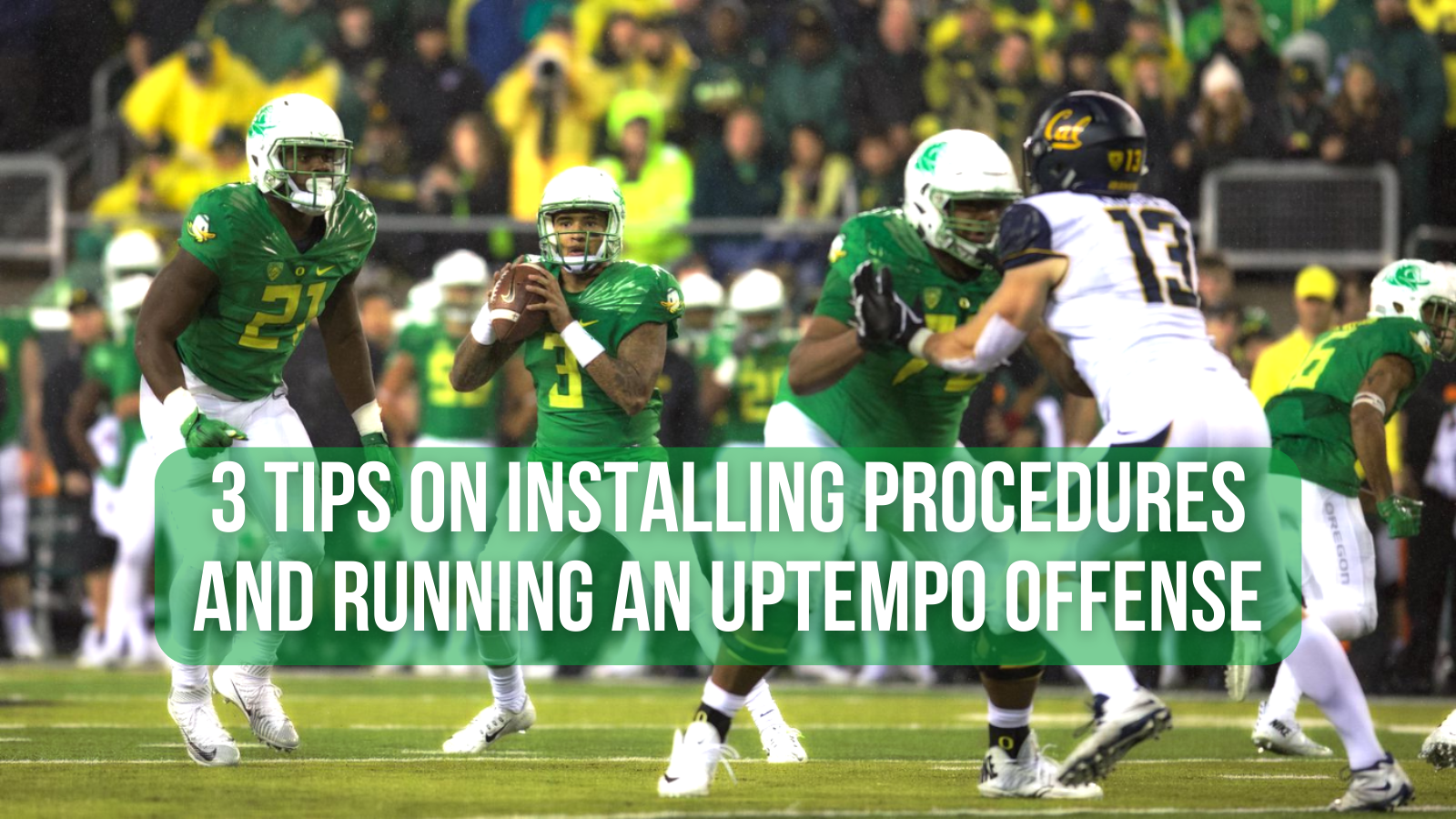 The procedures which you operate with must be installed early on in camp if you want being able to play fast as part of your offensive attack.  The consensus of coaches when talking to them is that it is much easier to slow players down as the coach than to try to get them to speed up.  What you do early on in camp and installation will become a habit.

With that in mind, here are few tips on installing and running an uptempo or multiple tempo offense.  These are simple things which can be added in camp and emphasize early to create a team that operates efficiently.

Measurable operation is critical in operating at this blistering pace. As with any concept, attention to detail and a method of evaluating and giving feedback is the way to make it effective. Keith Barefield studied every aspect of how tempo is done to shave critical seconds off of the time between the whistle and the next snap. Here are a few:

Keith Barefield explains the tenets of a measurable operation in the video below:

University of Tennessee Offensive Line Coach Glen Elarbee has specific mechanics and coaching points for the offensive line when utilizing tempo. It helps the Volunteers save critical seconds off of their operations when the objective is to go as fast as possible. He also explains in the following video that they will utilize scrimmage film to teach these aspects of tempo to their linemen.

Yes, an offense can go fast all the time. Like anything, there is an aspect of when something is done one way, the opponent can adjust and settle in to playing that way. One way to think about it is utilizing tempo in waves and having a variety of procedures to do so.  In this video example, three variations of tempo are used.

The first is a procedure that simply tells the players to “run it again.” The second tells them to use the same formation but a different play, and the third gives them a sequence of plays. The timing of how quickly the ball was snapped went as follows: fast, fast, fast, slowed down slightly, fast (defense timeout to slow the offense down), fast. In this video example, it’s clear that the resulting touchdown was aided by the use of our procedures.

Whether the choice is made to go fast all of the time or to change-up  and use multiple tempos, teaching these procedures early on is critical. Organizing procedures within install plans and how they will be installed should be viewed as part of the process. Creating the resources for players will be helpful as well. ith

The cliche that has been around forever is that “it’s a game of inches.” Those inches which propel a team forward this season can be found in the details that are coached everyday and made a habit for players!

Resources used in this article (click on title for more):

Related Coach and Coordinator episodes (click on title to listen):

The Details of Coaching the OL In an Uptempo Offense – Glen Elarbee, OL Coach, Tennessee

Tempo Is a Lifestyle: Keith Barefield